Why Would I Want to Knit Sanquhar Gloves?

Knitting Sanquhar gloves and gloves from related historical design traditions holds a fascination for many contemporary knitters for the reasons listed above. Today, knitters all over the globe can find others on the Internet who share an interest in preserving and practicing these techniques, such as in the Sanquhar knitting group on Ravelry. The gloves pose many technical challenges that are satisfying for knitters to master. Further, they allow unlimited scope for personalisation, making them an ideal form of individual expression or a way to create a signature gift. 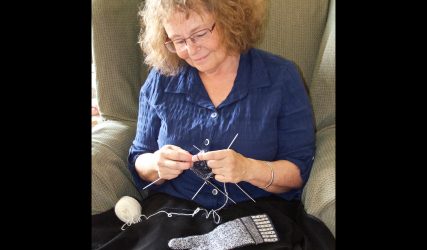 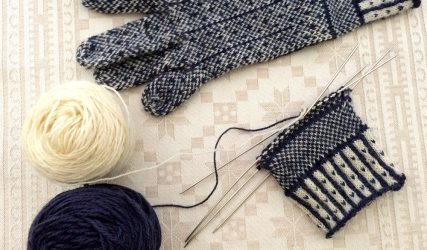 Some Comments from Knitters

“Knitting at a high gauge (10 to 12 stitches per inch) is an exhilarating challenge for me. To apply that to the brilliant mathematical logic of the Sanquhar glove architecture is even more rewarding! Once I know the number of stitches I need to knit the glove, I hardly need to look at the directions again, as the knitting advances in such a fashion. But even more than that is the feeling of connectedness to knitters in times past that I get from knitting an historical piece. I love to teach my class about Sanquhar Gloves.”  — Beth Brown-Reinsel

“From the moment I saw and tried on my friend’s Sanquhar ‘Duke’ gloves I was smitten. The thumb gusset fit my hand to perfection and seeing the fine architecture of the pattern right down to the triangular fingertips was an experience of utter satisfaction. I had never knit a glove before, but I just had to try now!”  — “Corvid” on Ravelry

The first published patterns for Sanquhar gloves date from the mid-1950s. The UK firm, Patons & Baldwins issued a leaflet, entitled Sanquhar Gloves: A Traditional Scottish Style, while the women’s magazine, The People’s Friend, published patterns for Sanquhar gloves and a matching scarf.  In supplements given with The People’s Friend magazine, The Sanquhar Knitting Book, and The Scottish Knit Book Number 1, patterns were given for gloves in the ‘Cornet and Diamond’ (or ‘Drum’) pattern and for gloves and a scarf in the ‘Rose and Trellis’ pattern. The Scottish Women’s Rural Institute (SWRI) continued to publish patterns for Sanquhar knitting in the 1960s and 1970s. These and other patterns are still available and are a great starting point for anyone wanting to knit Sanquhar gloves.

Examining A Pair Up Close

This pair of ‘Duke’ pattern hand knitted wool gloves is from the collection of the Knitting & Crochet Guild. The donor’s sister knitted the gloves for their mother who lived in Thornhill, the next settlement down the Nith valley from Sanquhar; she died in 1974 and the gloves came into the collection in 1996. Whether the sister knitted the gloves from a printed pattern or from the oral tradition is not known.  She made the gloves to match blue or grey outfits, and included her mother’s initials, “HCB,” in the cuffs.